Welcome to Everyday Designer Zach and thanks for taking the time to answer some questions for our readers. For those of us who are not too familiar with you, could you give us an introduction to what you do and how you found your feet in the industry?

Hey Bobby, thanks so much!

I lend my hand to a bit of everything really, splitting my time between my two person studio, Superhero Studios, and my conference HybridConf. At the studio I’m in charge of design, as well as working on some front & back-end development. For Hybrid, I take on whatever role is most pressing that week, whether it’s sales, design, or finding speakers.

I started out in the industry around 16 years ago, when I was 13 using Adobe Flash 2. I wasn’t enjoying school at the time, so instead I spent all my free hours enjoying learning the ropes of web design and development and began working within in the industry. A friend I met online and I partnered to create a design forum (I was always interested in community-focussed projects), and then subsequently a small studio. It all just started from there really and I haven’t looked back since.

Anyone that follows you will know that you’re an inspirational and positive figure within the industry. I know all too well that it can be so much easier to focus on the negatives of something, what advice would you give to people about having a healthier outlook when it comes to their work and the community?

I really appreciate the kind words.

I’m one of many people who struggle with this. It’s a difficult balance as the negatives are important, but you can’t let them rule your outlook and attitude. I try to be a ‘realistic optimist’ – I like to understand that there will be times where things will go wrong and I won’t fully achieve my goal, but I aim and behave as if there is a high chance of success. It protects me from being crushed if something does go awry, but means I can put all my energy forward into work and ideas. If it doesn’t work out, at least I know it’s not because I didn’t try.

Outside of our own personal feelings about our work, we all get wrapped up in seeking validation from our peers – it’s only natural to be buoyed by positive comments from those you like and respect – but sometimes we can rely on it too heavily. Often people may not comment on our work at all, but that doesn’t mean that it’s bad or wrong. A lot of great design does not have the immediate visual impact that provokes a lot of comment, but instead it’s invisible. It has a sophistication through subtleties that are not readily noticeable, and it provides rewards and improvements to both the clients and the user by creating an experience that just works.

Design can be a deeply personal thing, so even if we try our best it can be difficult to detach emotionally from the work and view it critically. What we do is more than just a job to most of us, and it’s something we feel is an expression of ourselves, so it can be hard not to be upset by negative feedback. Constructive criticism is the only true way to grow and get better, so if you do get feedback, treasure it. It’s a gift and without it we can’t improve.

For three years you have run an event known as HybridConf, with this year’s being the final one, where did the urge come from to launch and run what has become one of the industry’s must attend events over the past few years?

There were very few conferences that I’d been to that I felt were truly for me. I found that events (particularly those in the UK) often had the same people talking about the same thing they had talked about for the last three years. As an audience member, I was feeling more and more like I was there for their gain, and not the other way around.

I wanted to build a conference where we had lots of awesome speakers, with varying skills and all levels of familiarity, who would talk about that they actually work on and why they do it. When it came time to find speakers for the first HybridConf, it was imperative to me to find people who were genuinely passionate about the industry and the work they do, rather than those who were mostly speakers for the sake of being speakers.

I also wanted to create an environment where I would stop feeling like an attendee, and instead feel like a welcome guest. The people who come to our conference shouldn’t feel beneath the speakers. Our guests should feel completely included, on the same level as everyone else. Twitter counts, job titles, or years of experience aren’t important. Everyone can make a valuable contribution to our industry, not just veterans, and I wanted to embrace that.

As my vision for what a conference could be began to take shape, it quickly became about doing a lot of good with a positive mindset. We started to focus on what we could do to make this community better for everyone (Tip: Cake, fruit, and conversation helps).

HybridConf is everything to us, and it definitely wasn’t easy to make this the last one. When it came down to it, we decided to finish it this year as it takes so much work and we wanted to free up that time to work on other projects that are important to us. We will very much miss it.

What did you find were the biggest hurdles in organising these events and what would you say to others who wanted to start their own?

When people ask for advice, my first tip is usually to tell them not to run a conference. Not because it isn’t worthwhile, but simply because it’s always so much more work than anyone ever imagines. If they want to go ahead though, I’m always willing to help. We’re actually planning on releasing all our organisational details after this year’s conference to help inform others.

Conferences come in a variety of different sizes. For us, we run a two day conference with just two people working on it, which sees us putting in around a thousand hours of work each (that’s about 6 months worth). Our costs are high as we have lots of international speakers and all-inclusive features, but we don’t want to make tickets prohibitively expensive. This all means that we don’t really take any money from the conference, so we have to make all our wages from working at the studio in the time we have left. It’s a lot of effort, and a lot of worry having so much money hanging over us…

But when it happens, it’s so worth it: to see people laughing, chatting, and learning because of you; to see friendships made and businesses created; to see guests leave inspired and ready to do some great work. It makes it all feel like a worthy accomplishment. It’s something I will be forever proud of (so much so that both my business partner and I have the logo tattooed on ourselves). 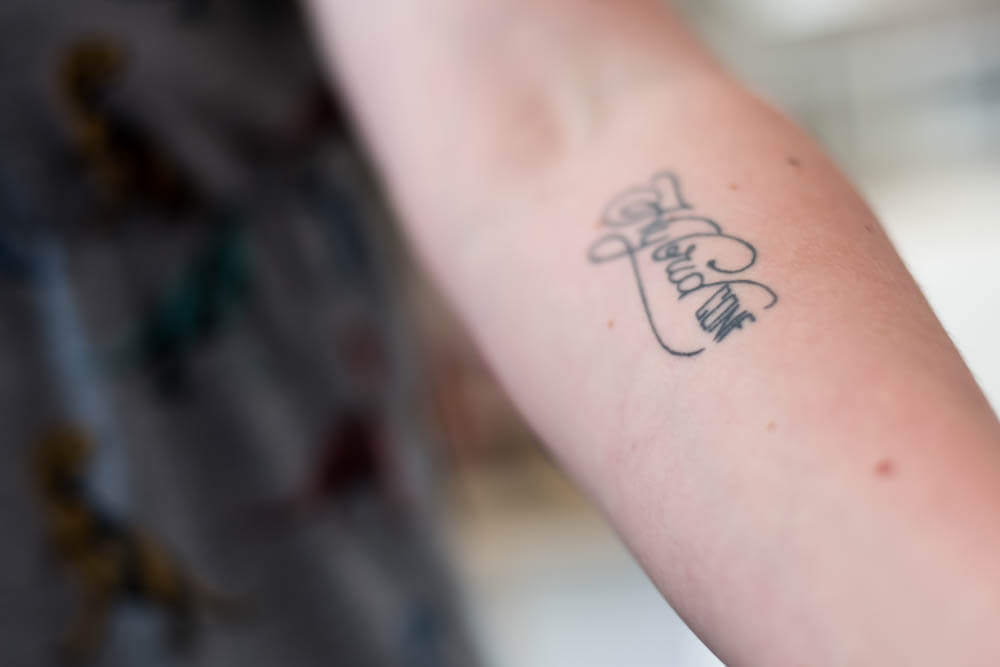 As one of the more inspirational individuals within the industry, I’d be interested to know who, or what, you find your inspiration in?

People, and their passion.

My favourite thing in the world is to listen to people talk about what makes them tick. Whether it’s work or hobbies, if it’s really important to them the energy that they give off is so contagious. We’re an incredibly blessed industry as most people who work in it do so foremost because they love it. We can use that passion to bounce off each other, support each other, and compound our own appreciation of work.

I try to surround myself with people who are passionate but realistic, creative but down to earth. Those people inspire me every day. I find that Slack really helps with this. Whilst it can potentially get in the way of work, if used responsibly it can be a great bolster to your output. Always having someone instantly there when you need a second opinion, an answer to a quick query, or just a reassuring chat for five minutes is a godsend. Going to meetups and conferences helps massively too – a couple of hours or days out of the office meeting new people can be a gigantic boost to your inspiration and morale. It’s one of the reasons we feel Hybrid is a success.

As well as being behind an acclaimed web conference you are also producing a book called “Everyone Welcome” which is aimed at helping people get into the industry. How is this project going? Do you have a timescale in mind for when you would like to have it produced?

In total honesty, it had to take a backseat for the conference. We just can’t produce both at the same time. I’m hoping with a bit of luck we’ll get to ramp it up after the final Hybrid is over.

The book itself is meant to be a guide on how to get into the industry – both for those who are already interested, and those who hadn’t considered it before. I want to use a really diverse set of authors so that anyone reading it can know that they’re also welcome in this industry, and so that people who aren’t already familiar with the industry can see what a fantastic, inclusive place it can be. I want it to be the go-to book when you have a friend who’s struggling to think of a career, or finding it hard to get a job.

I’m looking forward to finding time to work on it again. I want to make something beautiful in its own right, while being incredibly informative. It’s still at the forefront of my mind, and I’m excited to start working through some of the ideas that my business partner and I have set aside whilst we’ve been working on HybridConf.

This is a question I like to ask people, called “What in your bag?”, and is to get an idea of the equiptment and tools you would carry around with you for a design job. So Zach, what is in your bag?

I often see photos of other people’s minimalist bags and wonder how on earth they can do it. My bag is very much the opposite as you can see! This is what I usually have in my Langly Alpha Pro Black bag. 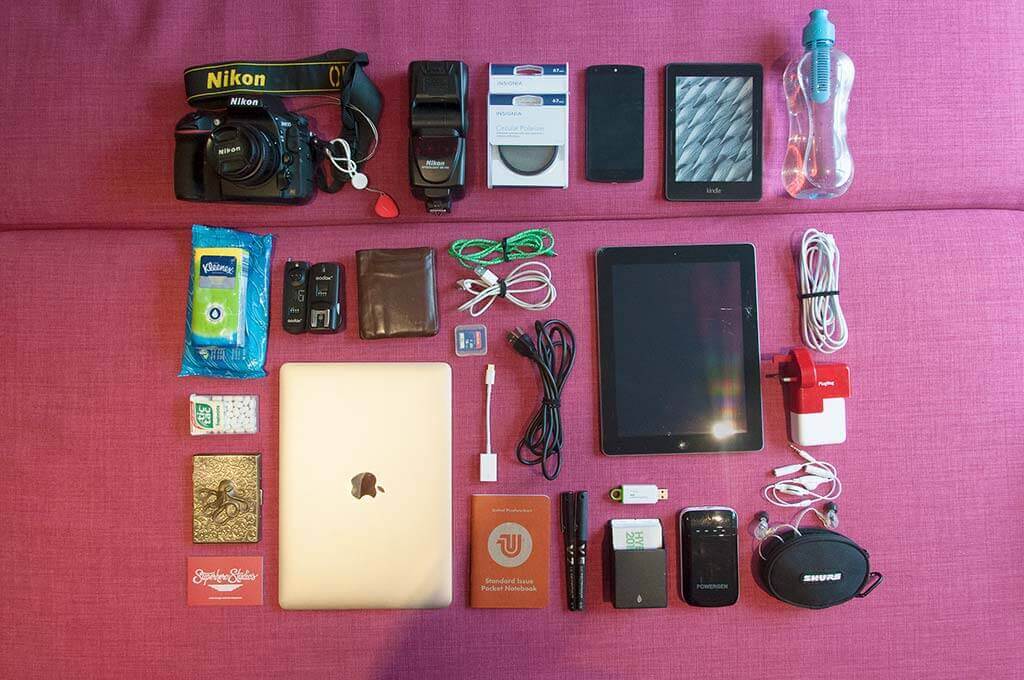 Everyday Designer is always on the lookout for guest posts on topics relevant to the web design and development industries, find out more about getting featured on ED…