I worked in an office, nine to five, for two and a half years before making the ascent up the steep mountain of working remotely from home. Having had lofty dreams about the scenario, there didn’t seem to be any issues from afar. It wasn’t until weeks in, steeped in the same workload, it became difficult to maintain focus with slow Internet, two dogs and a messy home. I became a hermit on my mountain. 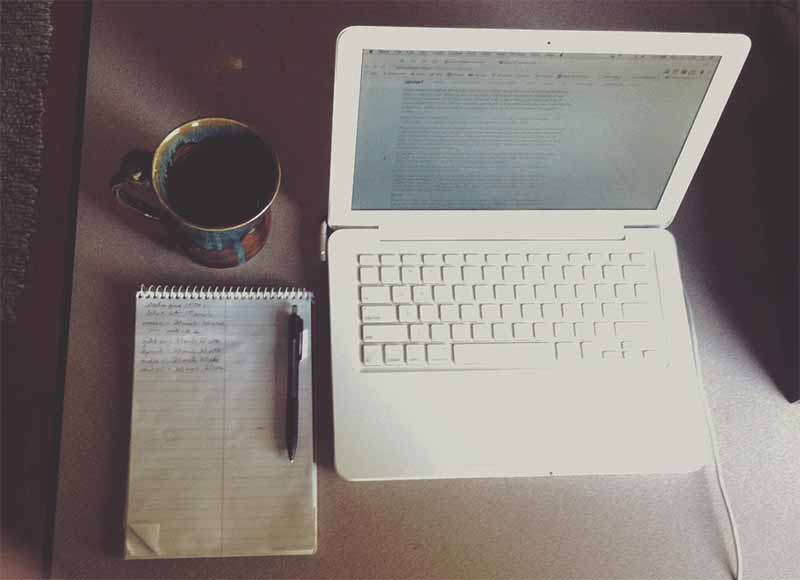 Still, the challenge of putting together a schedule and working after hours to get caught up made me curious to know if it would be worth it.

We (myself and two dogs) had moved from our hometown to support my girlfriend in finalizing her master’s degree, and promised to travel with her as she rotated from clinic to clinic, town to town. The dream, for me, was to work from the road and balance my time between work and managing our new homes as we travelled. Leaving her to focus solely on schooling.
My workday would allow for some exercise, and time to make lunch, with a technique called the Pomodoro timer technique I saw in an article .

This technique is specifically designed for those working from home. By using twenty-five minute intervals of work followed by five minutes of break repetitively, productivity should increase ten-fold. That combined with a steadfast, and dire focus should allow for best results.

Using Skype and VPN would help successfully stay in contact with my coworkers and access our server. Along with regular phone calls and Google hangouts, there was no chance of falling out of communication.

Everything seemed as though the perfect job had fallen into my lap. There was finally a chance to experience this idea of ultimate autonomy that had been echoing in the career dream corridors of my mind. However, upon completion of the first week, a sullen realization set in, and the trajectory of this home campaign would have to change. Just as soon as I could figure out how.

As if pacing back in forth had become my new occupation, and reverently waiting for pages to load my tasks, the Internet connection was promised by the local cable company had failed me. After a few hours of sitting on a customer service line there I was, scheduling an appointed for new service to be installed next week.

My hopes of hitting a local coffee shop for some dark espresso and a steady Wifi connection was shot when one of my dogs had become sick and while trying to remedy her homesickness with a local grass, known to cause stomach illness in dogs and people. It just so happened to be growing right on boarder of their new play area. With a lessened Internet connection, my hopes of Skype and VPN were lessened to a shaky VIP phone call every other week.

With little chance of getting out of the house, there seemed to be only one solution to getting work finished: stay late. My nine hours days turned into thirteen to fifteen hour days. This was a lot to get used to in of itself. No longer were my lofty dreams accessible. The show had to go on, as they say. However, into the second day, as the desk awaited me walking out of the shower there seemed to be an excess of water seeping into our hardwood floor. Upon further investigation there seemed to be leak coming for the shower drain. At this point the issue was unavoidable as was being forced to clock out and face the problem at hand.

As more and more things kept inhibiting my work flow, I was forced to abandon the Pomello technique thus focusing on my plumbing problems and sick dog, and completing work tasks when time allowed.

The Solution: Staying on Schedule

Noticing that the Internet connection at my home worked better in the early morning hours allowed me to focus and plan. I’d schedule veterinarian appointments for evening freed up time to dive into plumbing, and go through home emergency finances in the afternoon. Although I was working more than I was getting paid for, the value of keeping my job and this freedom that promised so much happiness would be worth it.

By the third week there was no holding back. Having worked day and night with no breaks there needed to be a change. Starting my third week of remote work with a purpose meant that the night before was spent planning. Goal setting ended up being the most important way to work. Exercise happened before clocking in and ended my habit of pacing.

Below is a list of tools that I used to keep bills paid, work scheduled, as well as clients and coworkers in contact.

Tools to that Helped

Working remotely was a larger adjustment than I had anticipated. It’s also not an option that is for everyone. Missing coworkers, and the overall enjoyment of being around people, as well as the perks of working in an office, are sure to make one feel like a hermit.

However, with discipline one can find the joys of being alone and completing tasks by going above and beyond what is expected. I was able to watch the sunrise and answer emails. Surprise and delight your co-workers and bosses. Soon the daily rigour will seem easy and the joy of autonomy will remind you why this is the road gone down.