Ever since Macromedia dissolved into Adobe at the tail end of 2005, taking with it their suite of applications including Dreamweaver, Fireworks and Flash, Adobe’s Creative Suite has easily been the industry standard for designers, if a little by default.

For those of you who aren’t familiar with Creative Cloud, Adobe moved from selling hard copies of their software for a one off fee (Creative Suite) to an online subscription service where their applications such as Photoshop and Illustrator are readily available for your use for a monthly fee. The benefits of this were that, for the first time, it made Adobe’s full suite of applications more affordable and you always had the latest version of the software. The downside to this is that unlike the Creative Suite where you owned a physical copy, you don’t own your Creative Cloud products, you rent them and over time, the cost of using this software adds up.

This is especially true if, for example, you only use Photoshop and Illustrator and don’t touch many of the other applications like Premiere or After Effects, however, the price of Creative Cloud does include access to services such as Typekit.

It’s debatable whether or not Adobe should have allowed people to buy physical copies of their applications on a one off basis and perhaps charged for upgrades (if required). For these reasons, plus the rise of some really excellent alternative products that you could buy for a one off fee, a lot of designers have started moving away from Adobe.

It’s questions I see on Twitter quite often, what are the alternatives to Adobe? Has anyone started using Affinity Designer yet? Who has completely moved to using Sketch?

As a digital designer that works predominantly on mobile applications and less so websites, Adobe doesn’t currently have an application that felt true to interface design as Photoshop always felt like a hacked around image editor. Adobe did have Fireworks and, in my opinion, despite it still being available on CC as CS6, they made a massive mistake in dropping support for the only real piece of software they had whose target market was web and interface designers.

If you happen to still use Photoshop as your main design tool, this isn’t a dig at you, it was everyone’s primary tool by default for years but there are now real alternatives that you should be considering.

The obvious one is Sketch.

Available for around the cost of two months Creative Cloud subscription (or as a free trial for those who want to test it out first) Sketch really broadened interface designer’s horizons with the inclusion of artboards. Despite the occasional bug when updates are released the Bohemian team are constantly updating and fixing the software. Sketch is lightweight, vector based, not resource heavy and ultimately, it has been designed with designers in mind rather than try to provide a hacked, laggy and resource heavy all in one solution. Sketch also has a sister application for your iOS devices called Sketch Mirror that allows you to swipe through your designs on your iPhone or iPad; a great tool to get a better feel of what you’re working on.

Bohemian release BETA updates and other features quite regularly, keep up to date with what’s going on with Sketch on Twitter.

For serious alternatives to Photoshop and Illustrator, I would highly recommend taking a look at Affinity Photo and Affinity Designer. Both of these products are available for around the cost of one month’s Creative Cloud subscription; there is also a free trial available via their websites. 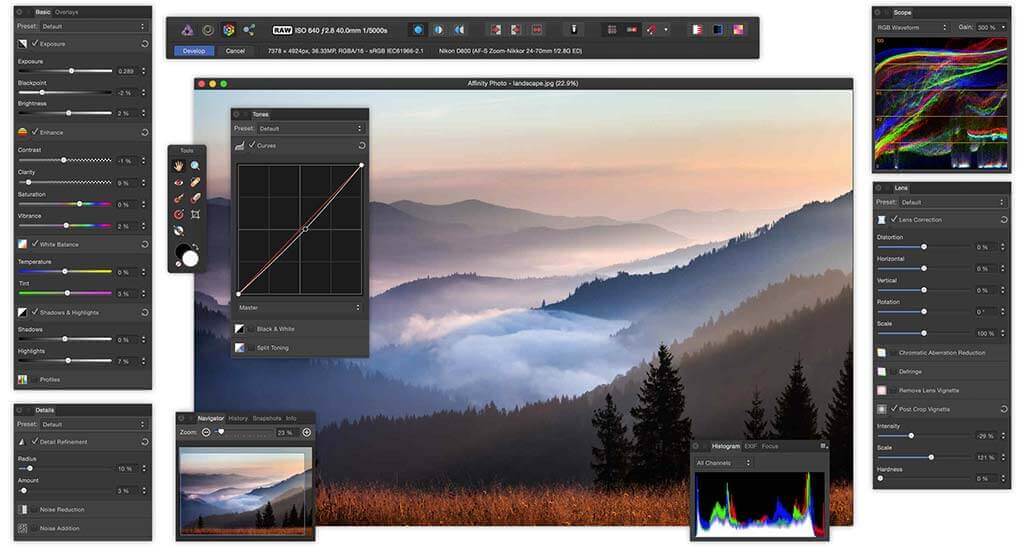 These are also extremely lightweight and easy to use. I use a late 2009 Macbook on my daily commute and have none of the performance issues that I tend to experience with Adobe applications. If you are moving from a predominantly Adobe based setup to either of these products you’ll also be glad to know that you can open your old PSD and AI files. Check out the video below for Affinity Designer.

You can keep up to date with latest updates and features from Affinity by following them on Affinity on Twitter.

The biggest downside to these three pieces of software, Sketch, Affinity Photo and Affinity Designer is that they are currently only available for Mac, so if you have any alternatives that are Windows based I’d love to hear about them in the comments section below.

One of the more recent updates Adobe made to try and bridge the huge gap that Sketch had created was to hack Artboards into Photoshop as a BETA feature. Whether it ever makes it out of BETA and into a full Photoshop feature I’m not sure, using it felt like such a knee jerk reaction to what Sketch was and had been doing since it launched. To me, it was obvious that whatever Sketch was doing, namely taking users, had shaken up the thinking at Adobe.

In my opinion an artboards feature would have been more at home as part of further evolution of the now defunct Fireworks. For a company the size of and with the resources at their disposal, I don’t know how it got to this point where Adobe felt that a heavyweight bloated Photoshop was the best possible solution for interface designers… or have they?

In the week commencing 5th October 2015, Adobe announced a forthcoming product that they referred to as Project Comet.

The best way I could sum up the software featured in the video is that it looks like Sketch with built in prototyping tools. This could be a game changer as up until now prototyping has been done in 3rd party applications such as InVision, Marvel or Principle.

Prototyping is the must have skill for web and UI/UX designers in 2015 and I could go in to it in so much more detail about that but that’s for another post! More to the point, Adobe has given us a glimpse of what seems to be the all in one product designers need but will they be able to buck their own trend of making it resource heavy and bloated?

Their reputation, and the future of Creative Cloud, may well rest on it.